I did several interviews and features around the time of publication for All The Time We Thought We Had. Being a journalist, even one who’s had to rationalise his career ambitions, definitely gave me an advantage over other writers when it came to generating this kind of publicity. But you still need a strong story that captures an editor’s imagination.

(If you’re interested in what I’ve written on other subjects, head on over to my other blog wordsforpress.wordpress.com)

This article I wrote for The Herald’s Saturday magazine looks back over the period after Magteld’s death and how we’ve coped as a family since.

“The experience taught me the importance of making time for grief: once it is rooted into your life it needs to be trimmed and cultivated, like a plant, or it starts turning up in unwanted places.”

An interview with Rona Dougall on Scotland Tonight. There’s a short clip below; sadly the full version is no longer available on STV’s website.

Anna Burnside of the Daily Record interviewed me while I was in Glasgow promoting the book. ‘It felt as if we had enough time to do everything. In fact it was all quite helter-skelter.‘

Lily-Anne Stroobach of expat radio show DutchbuzZ in The Hague generously tolerated my company twice – first in advance of publication and again just after the book was launched. You can listen to both interviews below.

An interview in Dutch with Jannetje Koelewijn of NRC Handelsblad: ‘The children don’t talk about their mother anymore now she’s dead.‘ (The Dutch don’t mince words with their headlines). 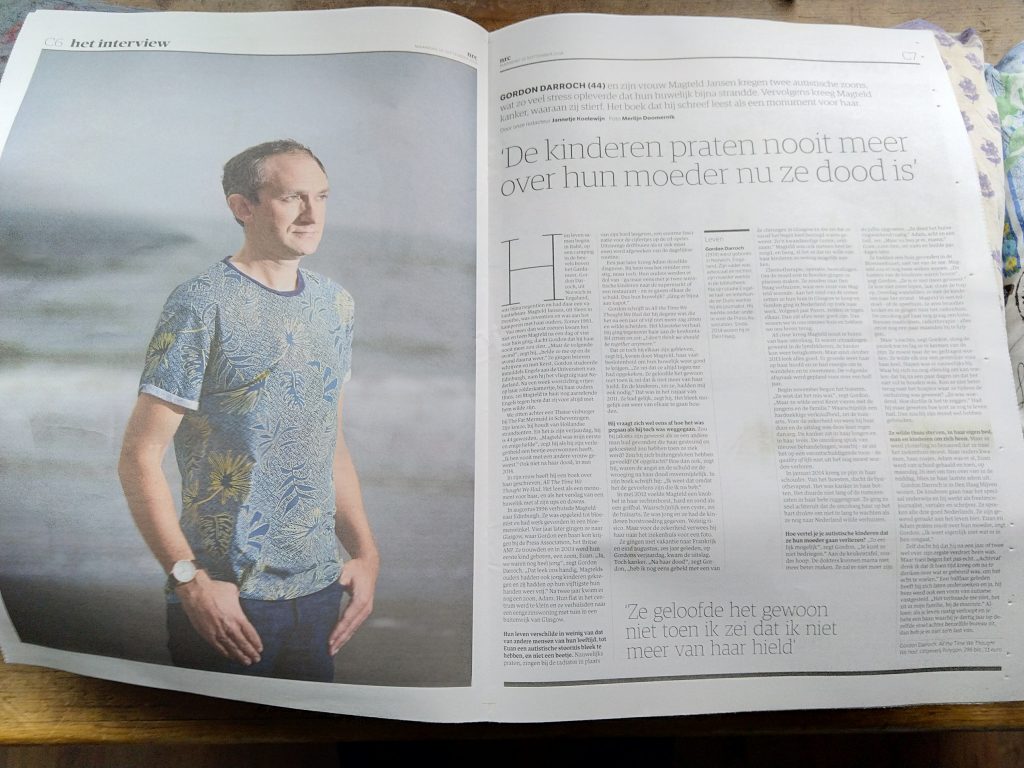 I answered some questions by email for expat mothers’ forum Amsterdam Mamas. ‘I definitely think the Dutch have a more constructive attitude to death.’

One of my favourite interviews was also one of the earliest, for Andy Clark’s Here in Holland podcast. It’s about 38 minutes long and includes some extracts from the book. I’m biased, obviously, but I’d say it’s worth making time for.

A shorter audio interview (and surely the most nepotistic of the bunch) with my DutchNews podcast co-host Molly Quell (interview starts at 23:45).

Slightly offbeat: a short interview with the National Union of Journalists’ Netherlands branch on publishing and modern journalism: ‘Instead of poking around in the dark, we’re trying to navigate in a blizzard.‘

A bit more offbeat: I did the DutchNews 10 Questions feature, where among other things I revealed my favourite Dutch food and whether I class myself as an expat or an immigrant: ‘I obsessively collect supermarket stickers for cheap crockery I don’t need.’