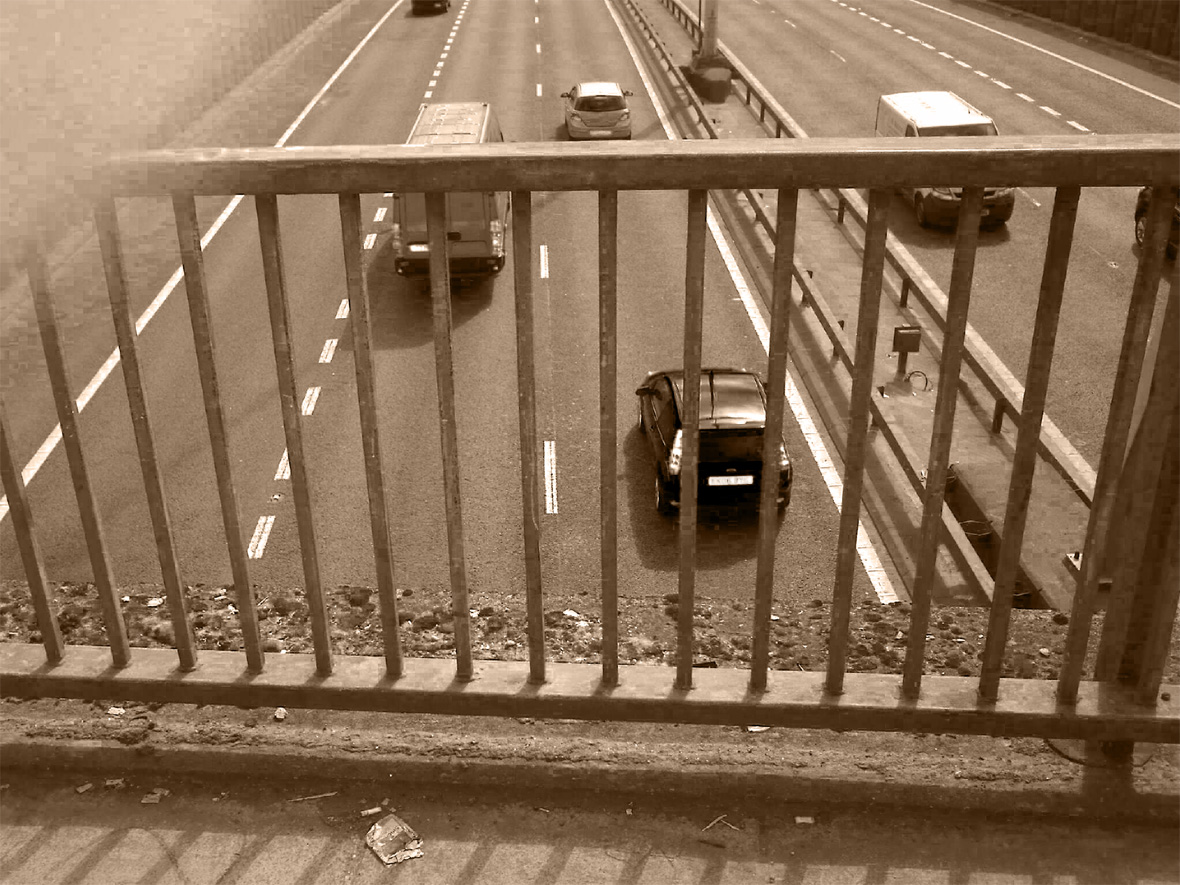 A thing I remembered recently: I’m really bad at hand gestures. Shouldn’t do them. It’s the same with dancing. Anything to do with spontaneous body posturing is just not my field. Fortunately I realised this and acted on it before the guy sprung from the ledge.

It happened like this. I was on my way to the post office with a parcel when I saw two women get out of a car and start shouting at a man. I moved to accelerate, as people habitually do in these situations. Then I realised something didn’t fit. Like that moment when you’re looking at an MC Escher and spot the water flowing uphill. I looked at the man again and worked it out: he was on the wrong side of the railing. And on the wrong side of him was a thirty-foot drop onto the motorway where the roofs of cars and lorries were flowing past at 60mph.

He wore a striped blood-smeared shirt and an expression of blank anguish. His legs were twitching. Yet something was holding him back. A battle with reason, probably, especially the bits about gravity and concrete. The options weren’t good: one way an open wall of death, the other a bunch of yelling strangers. Don’t do it. Think of your family. Think of all the people who’ll be killed in the crash. The truth is it’s all empty noise. You remember being told somewhere to talk jumpers back from the edge, and then you try to reconcile that with the fact that the guy’s toes are actually overhanging the ledge and if he leans over just a tiny fraction more he’s fly food.

I thought: don’t startle him. Keep him hanging; hope the police arrive. Has anyone called the police? Yes. Good. The women kept on shouting. People were walking by, better things on their minds. I was shouting at him. I offered to talk. Christ knows what I could have said. He pointed down and said: ‘This is the answer.’ Clearly, matter-of-factly, as if he were disputing a parking ticket. He let go of the railing and shuffled away, over to the fast lane. It was a change of key. His legs twitched more violently and for an instant he put his hands together. To dive, not to pray.

Don’t startle him. I moved over to the side, out of his vision. He wasn’t really looking at us anyway. I put down the parcel. That’s when I started with the gestures. I waved towards three people standing on the corner. One looked my way, the others tried to shuffle behind a lamp-post. My idea was to grab him in a pincer movement, one on each arm, smoothly, without sudden movement, but I needed a partner. How to convey that with your hands to somebody you don’t know standing 20 yards away. I tried sweeping motions to express move in, grab him, pull him over. I hate to think what it must have looked like.

The fear as I stepped forward was of losing him. Not just seeing him slip under the bridge, but feeling it. Failure is most terrible when the margin is minute. Stupidly, I didn’t even think about being dragged over the side. I grabbed the right arm, stilled him. The guy from the opposite side reacted in half a second and seized the other arm. The jumper lurched and shouted. A dreadful tautness in the fabric of his shirt. Then more hands emerged. We grabbed his legs, his waist, hand over hand like rock climbers, and dragged his tree-like weight over the railing. Somebody pinned him to the ground. He was calling us bastards, but his effort was spent. He kicked out, limply.

A man in a pinstripe suit came over with a plastic badge around his neck. He said to us: ‘Make sure you don’t asphyxiate him by pressing on him.’ ‘Make sure you don’t’ – we knew instantly he worked in healthcare from those words, the suit and the badge. The badge seemed to agitate the guy on the ground, who wriggled again. The man in the suit asked if he was on medication and the guy replied with a long name. ‘When did you last take it?’ ‘I’ve not taken any today.’ Unemotional, without hesitation: this was a learned routine. We saw he was bleeding again from a wound from his back. The pinstriped man asked if anyone had a first aid kit. One of the women fetched one from the car and the man applied a dressing. The sense of chaos receded.

The police and ambulance arrived minutes later. The pinstriped man explained about the wound and the medication, then stepped away. Everyone stood around and watched the men in uniform attend to the guy on the ground, who was now lying perfectly still, like a roll of carpet. A policeman came over and took notes. People chatted: the man who’d grabbed the other arm was a passing taxi driver who’d pulled over when he saw what was happening. That’s all we were: an assortment of strangers dragged from the stream of our daily lives to pull a man back over a railing.

(Later on I’ve told this story at a networking gathering for writers, and later still I’ve gone home and sat with a glass of whisky and reflected that I still don’t know why I got involved. It would have been easy, perhaps sensible, to just carry on towards the post office. We live in a broken society, so why put a damaged piece back in the mosaic: a branded failure who owes you nothing and can never hope to repay you? If I hadn’t delayed my departure from the office for five minutes to tell my colleagues what a hellish time I was having with the latest Irvine Welsh, the guy would never even have existed for me. Instinct defied reason.)

We stood leaning against the railing and asked ourselves where he’d come from and what he could have been fleeing. A secure hospital, a broken life. Nobody knew but we wanted to talk. One of the ambulance men came over with a stretcher. ‘I’m going to roll you over now, Rory,’ he said. The man dumbly nodded his consent. Rory. In all the commotion not one of us had asked him his name.

5 thoughts on “Chippings from the quarry #2: The railing”